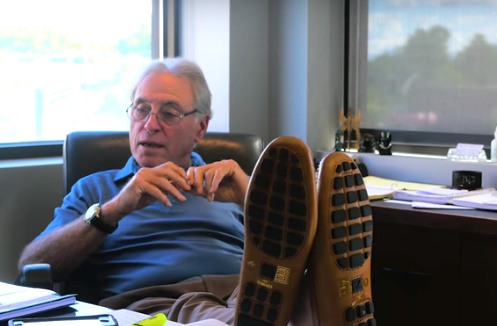 "He was a brilliant, naturally gifted attorney. He knew how to read a courtroom."

Norman Lippitt, a "brilliant" lawyer intially known for successfully defending white police accused of beatings and murder at the Algiers Motel during the 1967 riots, died Monday from complications from bladder cancer that turned to bone cancer. The 85-year-old Bloomfield Hills resident died at home under hospice care.

For 17 years, until 1984, Lippitt was the lead counsel for the Detroit Police Officers Association, defending cops in high-profile cases, often involving brutality and murder. Before that, he was a Wayne County assistant prosecutor.

"He did those cases because they were his clients and he was going to win for them, that's what lawyers do," said Brian O'Keefe, Lippitt's law partner for 32 years. "You don't make a moral judgment when you're trying to win for your client."

His private practice as a criminal lawyer thrived, but then-Gov. James Blanchard appointed him to the Oakland County Circuit Court bench in 1985. In 1988, he gave up his gavel and returned to private practice, where he focused primarily on commercial cases. He eventually founded the Birmingham law firm Hyman Lippitt, and later Lippitt O'Keefe in Birmingham.

"Norman was probably one of the best trial attorneys to ever come out of Detroit, Michigan," said attorney Sanford Plotkin, who worked for Lippitt in Birmingham. "I learned a ton from that guy. I think he was a brilliant, naturally gifted attorney. He knew how to read a courtroom."

Lippitt, who was known for his confidence, flash and swagger, became the go-to lawyer for the Detroit Police Department when cops got in trouble.

The spotlight returned to Lippitt in the summer of 2017 with the debut of Kathryn Bigelow's film, "Detroit," based on the Algiers Motel killings during the 1967 rebellion. One of the characters in the film was Lippitt, played by John Krasinski of "The Office" fame.

In July of that year, Lippitt had yet to see the movie but said during an interview with Bridge Michigan he was concerned it might not depict him as the brilliant lawyer who convinced the jury to acquit three white cops and a Black security guard in the death of three Black teenagers, and the beating of a number of people. A second trial in federal court involving two of the cops also resulted in acquittal.

Not everyone gave Lippitt a pass for what he saw as simply doing his job as an attorney.

"Norman Lippitt is soulless," Sheila Cockrel, a former Detroit city councilwoman, said in in the 2017 Bridge story.  Her late husband, attorney Ken Cockrel Sr., sued the city over police abuses in the 1970s.

"Norman got extremely wealthy protecting raging police brutality. It's a form of cynicism that is breathtaking."

Younger criminal defense lawyers looked to him to learn the craft of jury trials.

"He was a legendary guy when I was a young lawyer," says Detroit criminal defense attorney Steve Fishman. "I spent a decent amount of time watching him in the courtroom. I learned how important it is to keep your eye on the jury at all times and try to understand how they are thinking."

Born in 1936 at Harper Hospital in Detroit, he grew up at Indiana and Seven Mile Road in Northwest Detroit.

He went to public school, then Country Day School, which was on Seven Mile in Detroit at the time. He left Country Day and went to Mumford High School in Detroit before returning to Country Day.

"It was the second year the school was open and they didn’t have a football team," he said in an interview for the Detroit Historical Society Detroit 67 Oral History Project. "I wanted to play football so I went back to Country Day. I played football and then went to Michigan State University. I was a walk-on football player. I didn’t make the team, so I transferred to the University of Detroit and played a little ball there, ran track and then decided to go to law school before I graduated."

Lippitt told Bridge he grew up in a Jewish family of tough guys and didn't dream of being a lawyer.

"I didn’t want to go into the jewelry business with my father," he told the interviewer William Winkel. "I knew I wasn’t qualified for medicine or dentistry. I was a political science and philosophy major. Law school seemed like a logical step. I had no ambitions of being a trial lawyer or anything like that. It just happened."

Lippitt graduated in 1960 from Detroit College of Law, passed the bar, and joined the Wayne County Prosecutor's Office in in 1961. After four and a half years, he left to open a private practice in downtown Detroit.

Besides the Algiers case, he got Detroit cop Raymond Peterson acquitted of second-degree murder in a high-profile trial in 1974. Peterson was considered the most notorious member of controversial STRESS (Stop The Robberies, Enjoy Safe Streets), a Detroit Police undercover decoy unit created to fight street crime. He was involved in 12 STRESS-related shootings.

Lippitt called it a "very famous case" in which he used a jury consultant.

"I was one of the first lawyers in the country to have a jury consultant, a psychologist, long before O.J. Simpson had one," he said during the oral history interview. "We selected a jury for Ray Peterson. Ray Peterson was accused of killing a white person, not a black person, although he’d been accused of killing six Black people before that while he was a STRESS officer.

"We had a jury of 12 people – one Black man or woman, I’m not sure which. I think it was a Black man. My jury consultant wanted to keep him on the jury; I wanted to throw him off. He was the only one who hung up the jury for 10 hours. Ray was found not guilty. But he hung it up, he wanted to find him guilty."

In the 1980s, he says he got tired of being typecast as a criminal lawyer.

"So my biggest concern with all this publicity was all these years was Norman Lippitt, criminal lawyer," he said. "Sam Bernstein, automobile accidents. You wouldn’t think of going to Sam Bernstein to draft a will. I never wanted to be typecast. I was typecast. That’s why I took the judgeship when Blanchard offered it to me, because I wanted to change my image. I didn’t want to be a criminal lawyer."

When he returned to private practice, he focused primarily on commercial law and took on clients that included Ford Motor Co. and businessman Matty Moroun.

"He didn't get wealthy doing criminal cases," said O'Keefe, disputing comments to the contrary. "He got weathy after he left the bench, doing commercial litigation."

On occasion, after his judgeship, he dabbled in criminal law. In the early 1990s, for a brief time he represented ex-Detroit Police Chief William Hart, who had been accused of embezzling $1.2 million from the department. But before the case went to trial he handed it over to criminal defense attorney Thomas Cranmer.

Lippitt worked until the end.

O'Keefe said Lippitt came into the office two weeks ago and was still discussing cases.

"You very rarely find another fighter, another trial lawyer, another warrior like Norman," O'Keefe said. "He's a dying breed. He was the guy you wanted in the foxhole next to you."

Video: Here's Why You Should See the Very Cool DLECTRICTY in Detroit Tonight