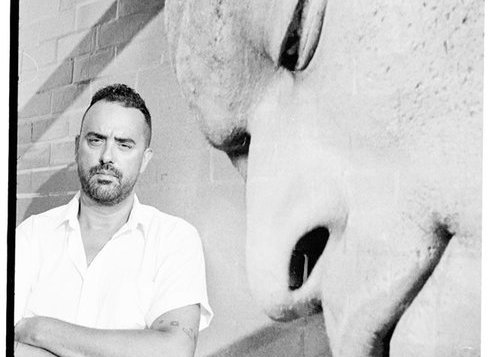 The lamestream media is reporting that a new Eminem mural in Detroit's Midtown has been defaced, but we'd like to think of it as more of a "yes, and..."

More than a dozen tiny bird silhouettes were added to the peach face of a youthful-looking Slim Shady painted Saturday on a vacant hut at 3107 Cass. The Eminem is the work of "artist, placemaker and economic developer" Chris Devins of Chicago. The added pattern by an unknown artist (or "tagger," as The Detroit News puts it) appeared just hours after Devins finished his portion.

Devins told The Detroit News he'd be back to "fix" the "disrespectful" "grafitti" before the month is out.

"I was devastated. Who would do that? That's against the rules of street art."

That seems unlikely now, however, as the work was painted over entirely by early Wednesday afternoon. It's possible that the building owner, who Devins concedes he did not consult, saw his mural too as "disrespectful grafitti." Property owners who don't register exterior art with the city are subject to fines and buffing fees.

Those rules appeared lost on the out-of-towner, however, who thought the wall "could use some beautification" and described his addition as "tactical urbanism."

After the defacement, Devins wrote on Instagram, "You can't give some people anything good. Dumb." Upon discovering the work had been painted over entirely, he said, "The fun Police strike again."

The city says it did not paint over the work. The owner of the building is listed as Bakers Corner.