There's a glaring gap at union rallies in Battle Creek, where a strike against Kellogg is nearly a month old. 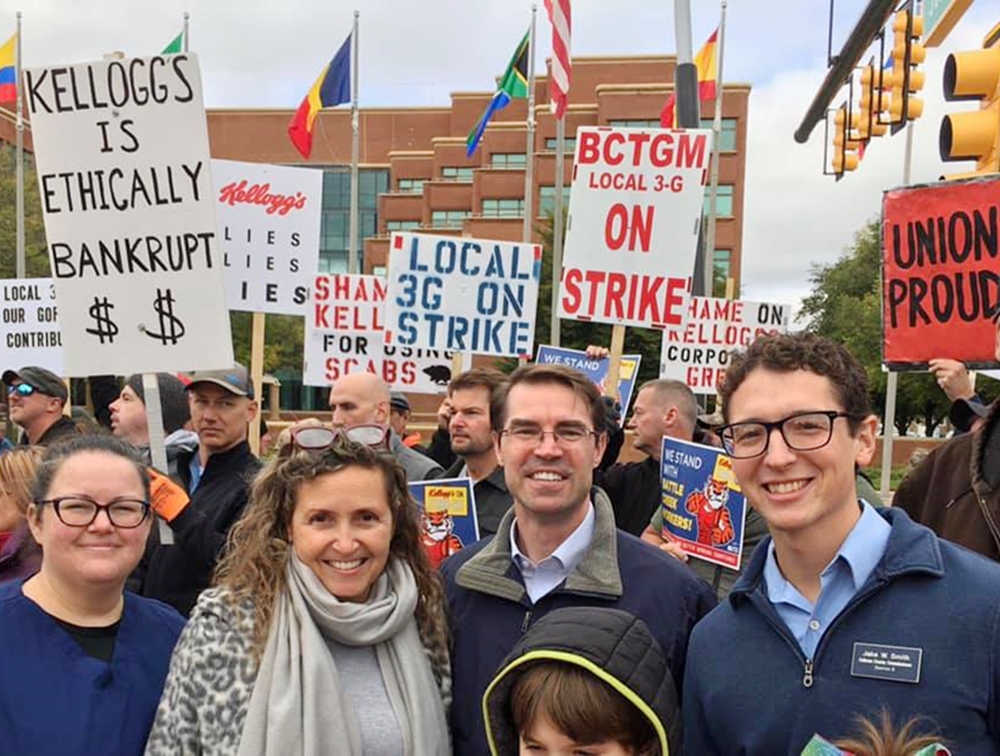 Workers have seen five state legislators and received a supportive letter from U.S. Sen. Gary Peters. But gestures of solidarity all come from Democrats, as Michigan Advance notes:

Notably absent in this show of support, however, are any Republican elected officials — even those who directly represent the Battle Creek area.

The strike began Oct. 5 at a plant in the cereal maker's headquarters city, where 325 workers walked out when a one-year contract extension expired. Union members also are on strike in Omaha, Memphis and Lancaster, Pa. 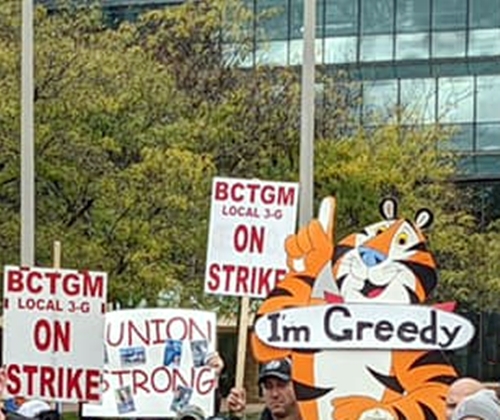 The issues are job security and a two-tier system giving lower pay, higher health insurance payments and fewer benefits to newcomers. Negotiatons resume Tuesday with the Bakery, Confectionery, Tobacco Workers and Grain Millers International Union, which represents about 1,400 strikers in all.

"Our plant in Battle Creek is probably 70% Republican. This isn’t a left or right issue. … There's no place for politics when it comes to a living wage.

"Even though we aren't hearing from the elected Republicans, this isn't about party, and I personally hope that they will see that and … realize that it is OK to support striking workers." 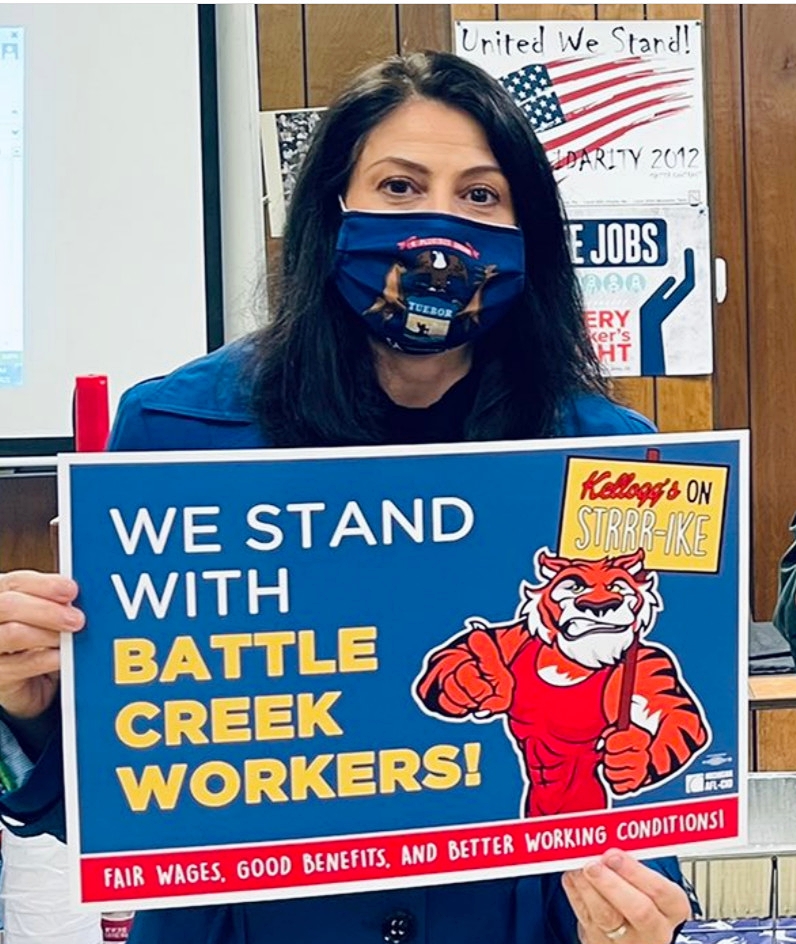 Dana Nessel at the union office in Battle Creek this week (Photo: Twitter)

The Michigan Advance writer speaks with two other strikers. "You know … you can be conservative and still support your community and your town and the people in it," 47-year-old Damion Kreger tells her. He's a Battle Creek native who has been a health and safety technician at the Kellogg factory for 13 years. 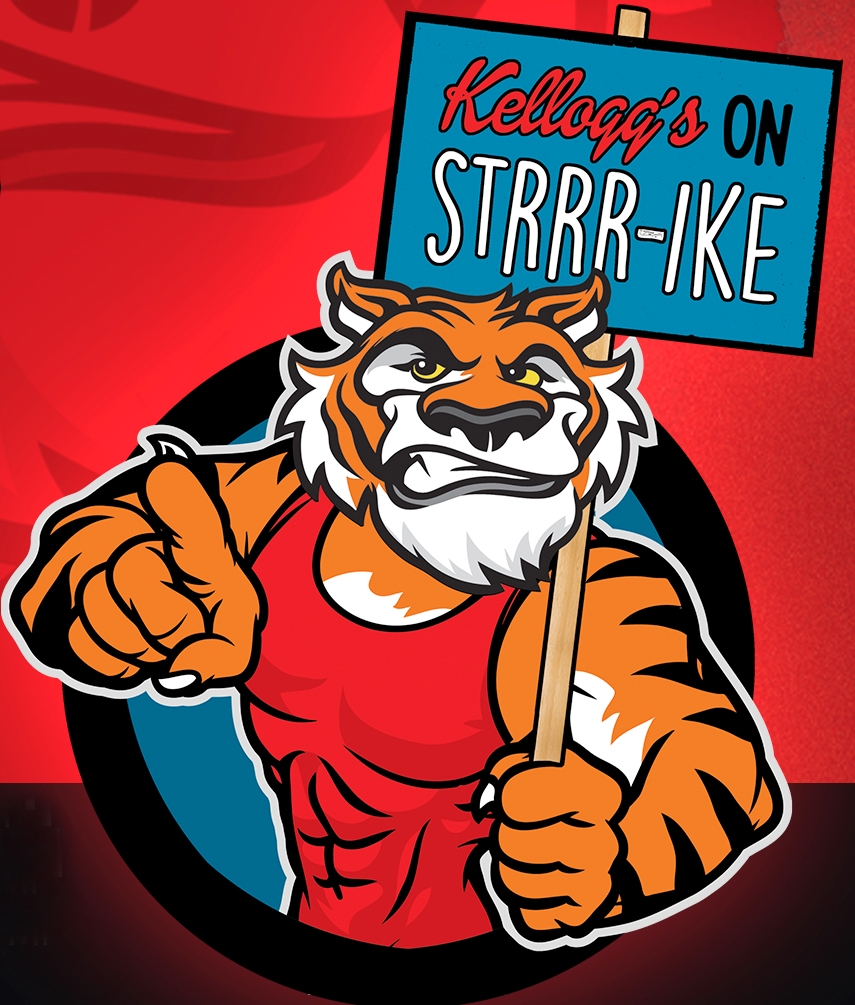 Michigan Radio posts this perspective from Trevor Bidelman, president of the union local:

"Kellogg's endgame seems to be really about pulling jobs out of the United States and shipping them elsewhere. So we've got to do something to make sure we put our foot down and stop that as well.

"The strike here is ... not just simply about what's going on at the Kellogg plant. It's really about the future and making sure that people across the board are done being exploited by corporate greed."

At its national site, the union posts this context about its contract objections:

A two-tier system is a devious way for employers to slowly, but surely, take power from union members, their contract and their union. The company is trying to divide the workforce by asking the current workforce to sell out the next generation of Kellogg workers.