MSU ritual: Where there's smoke, there are football win excess at Cedar Village

As sure as the sun rises in the east, mayhem follows MSU's victory over its cross-state rival. (Photos: WDIV screenshots)

We get rites of passage, but not those involving property damage and juvenile behavior.

The latter reflexes kicked in Saturday afternoon at Cedar Village student apartments near Michigan State's campus after the Spartans beat the Wolverines by 37-33. An SUV was flipped and a student was yanked off a burning couch as his clothes ignited. 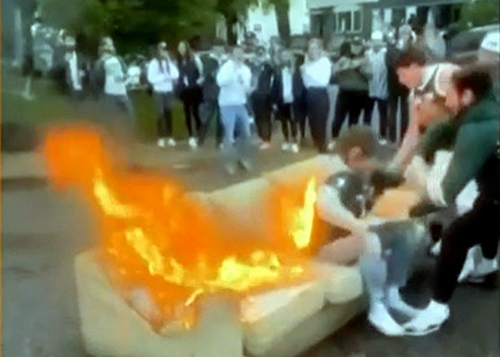 Gonzalez said a Toyota 4Runner was flipped by crowd members who tried to burn it but failed. Instead, some threw firecrackers at the flipped SUV while others burned a couch nearby.

... Several people were arrested, but no details were available Saturday night. ...

Earlier blazes were seen on Harrison Road north of Michigan Avenue and on Abbot Road. The night was exceptionally busy as exuberance sometimes turned destructive.

A number of attempts were made to light furniture on fire, but were foiled by both the wet weather and the police confiscating at least one piece of furniture. ...

At approximately 5 p.m, one hour after the game had ended, police began to clear the area. A few small projectiles, such as bottles and cans were thrown at police.

One of its reporters live-tweeted:

A vehicle has been flipped. Students currently celebrating atop and kicking in the windshield. @thesnews pic.twitter.com/3Xzj0RkY4x

Aftermath. Firework was set off near car. Much of the crowd left after. @thesnews pic.twitter.com/DIivpfySIe