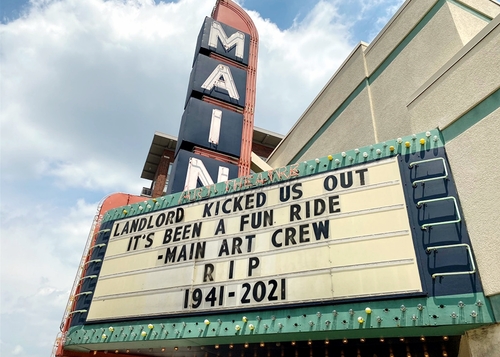 A newly formed nonprofit whose mission is to save Royal Oak's only art house theatre begins its effort Sunday with a fundraiser to cover its costs.

The Main Art closed abruptly this year after its operator, Landmark Theatres, put it on hiatus because it wasn't covering its costs with the pandemic. It broke the bad news in June with the marquee message at right.

Saying that the theatre "has immense significance ... for generations of moviegoers," Friends of the Main Art Theatre Jason Krzysiak shares the grassroots group's plans with the Free Press:

Krzysiak says members are "adamant that no path should go unexplored," whether it is a collaboration with a corporate sponsor, an arts organization or the city. They hope to get the ball rolling by meeting with the A.F. Jonna company and working toward "extending and creating a relationship with the property owners to say: 'Hey this isn’t just any other property that you own. This is a cornerstone of the culture of the community that they operate and live in as well.'”

There has been brief initial contact with (building manager) A.F. Jonna, according to Krzysiak. ”They have been courteous but … they’ve basically said that there is no plan for the property at this time.”

The Free Press was unable to reach A.F. Jonna for comment.

Krzysiak says members are realistic about the challenge of making their dream come true. "We definitely realize that this is an uphill battle. We recognize the fact that there have been a lot of beloved theaters across the country and North America that have shuttered their doors.”

He says the group is researching other theaters taken over by local residents and community organizations such as the Redford Theater, which is owned and operated by the Motor City Theatre Organ Society, a 501(c)(3) organization.

It's unclear how much it would cost to reopen the theatre.

For now, Friends of the Main Art hopes to only promote its mission and cover its expenses with Sunday's fundraiser at Bowlero & Lounge. Attendees are asked to contribute $15 to $150 to the cause. Updates on the effort will be available at the group's Facebook page.