What has that saucy minx Kelly Stafford gotten herself into now? What? You say she threw a pretzel -- a pretzel, mind you, not a whole bag of them -- at a trash talker at a 49ers fan at Levi Stadium? 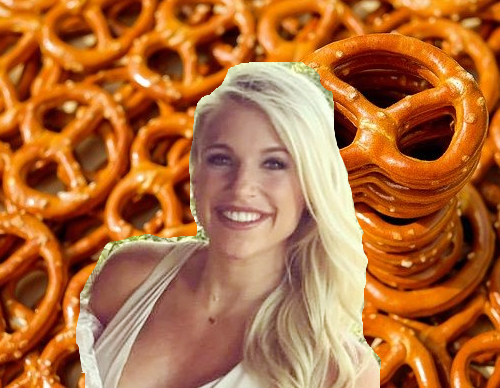 The perp with her weapon of choice (File photos)

WHAT IS THE WORLD COMING TO WITH THIS VIOLENCE WE CAN'T EVEN.

Witnesses told TMZ Sports that Levi Stadium security had to step in and escort Kelly Stafford and her crew to their seats after the incident with a fan.

One person on Instagram who claimed to have witnessed the encounter called Stafford out for her behavior.

"Who do you think you are to do such a thing? You are lucky you didn’t hit me with it because the outcome would have been different for YOU," the self-proclaimed Rams fan wrote. "Show some class and support your husband and his new team with grace please."

Grace, one might point out, can also be represented by not getting one's knickers in a twist over a thrown pretzel, but Mrs. Stafford did the usual: Calling herself an "idiot," claiming she's "embarrassed" by her behavior and promising not to do it again.

As often happens in these cases, we have questions: What sort of pretzel was it? Soft and chewy, like you get at the mall, or a mini pretzel in a bag, like you might get at a football stadium? Was mustard involved? Staining a fan's shirt with a condiment seems like a greater sin than just a bop on the head with a lightweight snack, but what do we know?