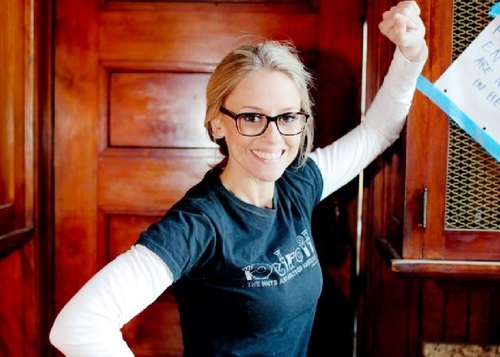 Curtis is at the center of a case her lawyer says splits "hairs over a truck and a couple hundred dollars."

HGTV star Nicole Curtis illegally withheld nearly $2,000 in wages from a former personal assistant who damaged Curtis’ pickup truck, according to a lawsuit that represents the latest drama to involve the high-profile home rehabber.

The suit, filed last week in Detroit’s 36th District Court by Melanie Szafraniec, 39, paints an unsavory picture of the business dealings of the “Rehab Addict” host and producer who’s previously conceded a “tendency to piss people off.”

Curtis calls it a publicity stunt, saying the assistant agreed to have the cost of the repair deducted from her pay. The TV host's lawyer, meanwhile, says correspondence surrounding the suit “borders on extortion.”

The dispute allegedly began in late March, when Curtis had Szafraniec pick up her 2012 Dodge Ram from Detroit Metro Airport while she was out of town.

From there, Szafraniec’s version of events goes like this: Tasked with dropping the truck at Curtis’ home and coordinating additional rides for herself — as Curtis did not offer to cover the cost of a ride share — Szafraniec recruited a mutual friend’s help. That friend, Martha Glover, backed Curtis' car into a dumpster, cracking the tail light and leaving a scratch and dent on the back fender.

Though Szafraniec and Glover immediately replaced the light, preliminarily sealed the scratch and offered to pay for the remainder of the repair, quoted at approximately $650, Curtis responded “by belligerently screaming expletives” at Szafraniec and ignoring her later efforts to coordinate a fix.

Szafraniec provided Deadline Detroit with the early April quote for paint, a bumper replacement, and repair of the vehicle's side panel; a screenshot showing she also texted the quote to Curtis around that time; and a receipt for the repairs she made on the vehicle. Glover corroborated her role in the events. 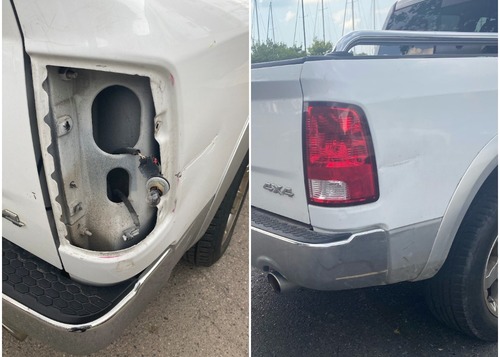 After that, Curtis stopped paying the part-time employee, resulting in her working approximately 100 hours over two months without compensation, at a rate of $20 per hour. Whenever Szafraniec would request her check, Curtis would ask about her truck. In July, Curtis told her it would cost $1,200 to fix, without providing documentation for the quote.

Curtis disputes this account. Reached by phone Monday, she said the cost of the repair would be over $1,900. On Tuesday, she said it would be approximately $3,400, based on a newly pulled estimate. That estimate, which she later provided, said it would be closer to $2,800, but it included additional repairs for which Szafraniec said she was not responsible, including to a front bumper. The quote also included the cost of re-replacing the tail light.

“We take all of this very seriously and I’m just astonished that ... someone who took our truck without permission, smashed it, did the damages, and didn’t repair it now comes after us like this,” she said, adding that she never gave Szafraniec permission to use the vehicle for personal purposes.

When the accident happened, Szafraniec and Glover, mothers with teaching backgrounds who spent time with Curtis socially, said they were stopping to drop Glover’s children at a nearby apartment, as her power had been knocked out by basement flooding. Glover said she was behind the wheel only briefly — to repark while Szafraniec was in the building.

At the time of the accident, Szafraniec said Curtis already owed her more than $1,000 in back pay and that, though she initially offered to deduct the cost of the repair from what she was owed, Curtis “never took me up on that offer and continued to ignore my attempts to rectify the situation.”

But Curtis insists it was Szafraniec who dropped the ball on communication and never provided a quote, though the text message screenshot indicates she did.

In a late October email sent to Szafraniec's attorney, Jack Schulz, Curtis said she’d consider paying the difference if Szafraniec could show she was indeed owed money, but the two appeared to arrive at a stalemate when he did not provide Curtis with the quote for the repair and Curtis did not reply to his requests for documentation that she'd had any work performed on the vehicle.

“The point of the suit appears to be notoriety for the lawyer, not justice for Ms. Szafraniec,” Curtis’ attorney, James Rasor, said in a statement. “The only reason that this case over $1,900 is notable is that Nicole Curtis is involved in it.”

Schulz, however, said "Litigation was filed as a last resort, not first, after several attempts to resolve the matter failed." 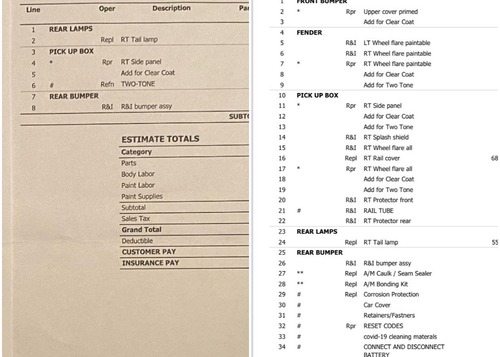 While Curtis, 45, has been embroiled in a number of public beefs since she began filming her show in Detroit in 2013 — including with the Detroit Land Bank Authority, city of Roseville, and photojournalists who preempted the televised unveiling of a completed project — the allegations are the first to suggest the poor treatment of an employee.

Szafraniec says she was hired in January and tasked with handling Curtis’ invoices, correspondence, expense report and schedule.

“It was, ‘you did this wrong, you did that wrong,’” the former assistant said. “I was always on edge.”

The alleged wage theft reflects a broader pattern of penny-pinching by Curtis, the suit and Szafraniec allege. Curtis, the suit says, has failed to pay past assistants. Szafraniec says contract workers were also delayed payment, and that Curtis would nit-pick over service fees or minor price increases.

“I get being frugal and trying to save money, being the wife of a business owner, but this was like over and above, not paying family businesses.”

“She didn’t like to make things easy for anybody, she liked to make things difficult until she got her way,” she said. “I truly think it was just a personality issue.”

The lawsuit admits that Ms. Szafraniec was a contract worker doing odd jobs, that she picked up the Client’s truck from the airport, and that she damaged the vehicle. Nicole Curtis asked for the truck to be immediately returned to her when she learned of the collision. Ms. Szafraniec acknowledged her wrongdoing and promised to pay for repairs to the truck. A week later, she contacted Ms. Curtis and indicated she couldn't afford the repairs and asked to work off the expense with odd jobs.

On October 20, Ms. Curtis’s team received an email from attorney Jack Schulz threatening them with a lawsuit accusing them of "vindictive wage theft." However, wages were never owed to Ms. Szafraniec, as it is our understanding that she was an hourly contract worker doing odd jobs, not an employee. Indeed, the lawsuit that was filed does not bring a wage claim, it brings a contract claim.

The lawyer’s letter, in our opinion, borders on extortion, as Ms. Curtis is a celebrity and the threat was that this case —worth $1900 — was going to go public and the implied threat is that Ms. Curtis would suffer embarrassment and mortification. Here’s an excerpt from the lawyer’s letter:

"over the years, I have filed several high-profile worker rights lawsuits and, based on this experience, I believe this litigation will unavoidably become public. I have counseled Ms. Szafraniec on the arduous public nature of the proposed litigation using other recent worker rights lawsuits which I have litigated against Founders Brewing Co and Kid Rock's Made in Detroit and Kid Rock's Made in Detroit and the City of Detroit as examples that is probable her case will be litigated to a national audience given the parties and circumstances"

However, instead of being intimidated, Ms. Curtis sent email reply to Mr. Schulz asking if he was aware of his client's offer to provide services in lieu of paying directly for the truck, but the lawyer did not reply. She asked Mr. Schulz to provide a an estimate for repairs if they felt it was less than services provided. Ms. Curtis offered to cut a check for the differences. The lawyer refused to provide anything, he refused to find a resolution. It became apparent that he was determined to make good on his previous threat to make this "public" even though Ms. Curtis was more than happy get it resolved. After all, this was all splitting hairs over a truck and a couple hundred dollars.

Ms. Curtis rebuilds houses NOT trucks; therefore, the only thing we had to go on is the estimates that her team received for repairs, but neither Ms. Szafraniec or Mr. Schulz would supply their bids for repairs. It is unfortunate that so much time was taken to threaten Ms. Curtis with a lawsuit, file a lawsuit, fail to serve her, then leak it to various media outlets vs simply replying to her emails and calls.

Our Client still hopes for resolution and wishes Ms. Szafraniec the best. However, the point of the suit appears to be notoriety for the lawyer, not justice for Ms. Szafraniec. The only reason that this case over $1,900 is notable is that Nicole Curtis is involved in it.

We know that Ms. Curtis is super excited to be filming again in Michigan. She is very proud of her amazing team and look forward to continue representing Detroit on a global level. We will vigorously defend the lawsuit, obviously, but it seems like an enormous waste of resources over a small amount of money.

It is unfortunate that Ms. Curtis, and her attorney, have accused my client of ulterior motives for filing the suit beyond obtaining money owed for her work as Curtis’ assistant.  Although $1,990 may be a small amount of money to Ms. Curtis, it is significant to a mother of limited means.

Since October, we have communicated with Ms. Curtis through email attempting to collect, however, Ms. Curtis has proven contradicting. Prior to filing the lawsuit, I indicated that Ms. Szafraniec would be open to accepting a lesser amount if we are provided information related to the costs of alleged additional repairs.

This email went ignored and unanswered. Several times it was indicated that my client would be filing the present lawsuit if this could not be resolved. As such, the complaint should come as no surprise to Ms. Curtis. It was filed as a matter of last resort—not first.

Since filing, Ms. Curtis has taken to social media to call my client someone with “zero skills” and falsely portray her hiring my client as her assistant as an act of charity. Sadly, it is apparent that Ms. Curtis believes her public status gives her license to treat those who assist her, such as Ms. Szafraniec, as unworthy of dignity and respect.

Rather than address the merits or engage in reasonable dialogue, Ms. Curtis has acted like a school yard bully. As a workers’ rights attorney, it is difficult to stand silent to such continued bullying simply for seeking to be paid the money she is owed. Again, I invite Ms. Curtis to simply compensate my client so both parties can move on with their lives.