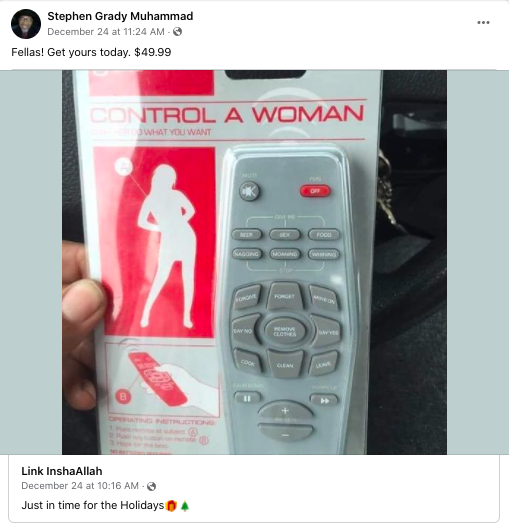 On Christmas Eve, Muhammad shared another person's photo of the pretend gadget on his personal Facebook page and wrote: "Fellas, get yours today: $49.95."

As of Tuesday evening, the repost has seven shares and 59 comments from both men and women, most of whom join in on the joke. One man pipes in: "I hope it comes with a money back guarantee." A woman remarks about controling women: "That's NOT going to happen!!!"  Another woman writes: "Ha!!! Don't even think about it."

Amanda Ghannam, a Detroit civil rights and employment attorney with NachtLaw, says public sharing of the mock device by an elected official is egregious and possibly revealing.

"I see a post like this, then you have to wonder, do these attitudes about women bleed over, whether it consciously or unconsciously sneaks into employment decisions that are being made? Does it lead to employment discrimination? It's just right for a hostile work environment."

There's an argument to be made that it's Muhammad's personal page, she noted, though "anybody can see this." She said it's disturbing to think public figures laugh at the idea of "a remote that you're going to press the button and have a woman remove her clothes. It's pretty egregious."

Evans Tuesday evening issued a statement: “In hindsight, I should not have commented and I can see where people could’ve taken my comment as inappropriate. I apologize to anyone who I may have offended."

His office said the comment also applies to the chief of staff, a former Ford Motor Co. executive who also had been chief of staff to longtime Detroit Councilwoman Brenda Jones.

Julie Hurwitz, a Detroit civil rights attorney specializing in government accountability and police misconduct, echoes Ghannam's remarks: "This is not simply about a hostile environment, this is an outrageous abuse of authority that perpetuates these objectifications of women and dehumanizes women."

"Certainly one could say, 'oh that was just a joke,' but some things just aren't funny."