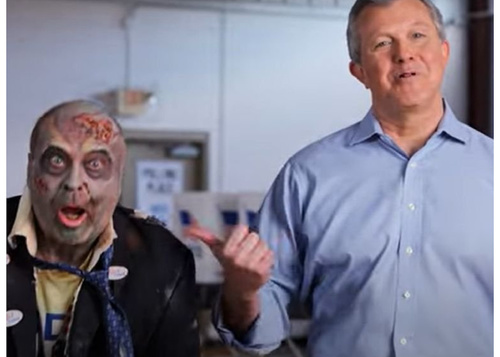 Next time you see that cheap-shot television commercial, look closely at the “zombie” standing next to Kevin Rinke, one of five surviving Republican candidates for governor of Michigan. (The 30-second ad is below.)

Rinke wants you to think the creature represents dead Democrats who vote, a chronic lie still pumped by Donald Trump and by the GOP in general.

In fact, the zombie could well be James Craig, the former Detroit police chief who, figuratively, shot himself in the foot when trying to get on the Republican primary ballot against Rinke and others. Craig got disqualified due to too many fake signatures on his petitions.

But Johnson got kicked off, just like Craig, for the same reason. Rookies at electoral politics, the best explanation is that these two amateurs – and three other Republican gubernatorial candidates – got scammed by con artists who make money forging ballot petitions.

Rinke is new at this stuff, too. But he survived the petition purge and remains above the write-in line for the August 2 ballot. Along with right-wing commentator Tudor Dixon, Rinke might be one of the Republican front-runners.

So let’s look at his campaign ad.

It shows a battered man in a shabby suit and tie, the primary clothing colors maize and blue. He wears a shirt that shows support for Democratic President Joe Biden and Vice-President Kamala Harris. He also wears several stickers that say “I voted.”

The man’s face displays blood and dirt with black circles around his eyes. He stands and walks unsteadily, as if he is a corpse come back to life.

“Why is it that dead people always vote Democrat?” Rinke asks the camera, while pointing to the zombie. “It’s not surprising that Gretchen Whitmer hasn’t done a thing to fix voter fraud.”

The 30-second spot – which includes a musical backdrop of anxious strings – ends with a stern voice vowing: “Conservative outsider Kevin Rinke for Governor.”

The clever image and words disguise lies big and small. First, the correct pronunciation would be “Democratic,” not “Democrat.” But you knew that, didn’t you, Mr. Rinke?

Second, “dead people” votes are rare and there is no way to ascertain which party, if any, is favored.

And, third, Whitmer doesn’t need to “fix” any “voter fraud” because there isn’t much of it, despite the bleating of Republicans, who were remarkably sore losers in the 2020 Presidential election.

Perhaps, if Rinke gets the nomination, someone will do a different sort of ad about things Rinke recently said in an interview with the Detroit Free Press.

When asked about “white privilege,” Rinke replied: “I don’t acknowledge the term `white privilege.’ I think that it’s a divisive term and it’s looking to stir things up.”

When asked about Black Lives Matter, Rinke replied that the movement is “full of hypocrisy. I think it’s full of hate.” These words might interest the voters of Detroit.

Rinke grew up as a rich kid in Grosse Pointe Farms. He inherited wealth and influence from his family’s auto dealerships, which sold, among other brands, Cadillacs.

In a piece he wrote last year for the Fox News web site, Rinke said: “If we had run our business the way Governor Whitmer ran this state, we’d be ridiculed, scorned and bankrupt – and rightfully so.”

On other topics, Rinke opposes a woman’s right to choose abortion except in cases of rape, incest or the life of the mother; he hopes to eliminate the state income tax; and another of his commercials compared Whitmer to a Yugo, a car from the Soviet era.

Should Rinke face Whitmer, the tone of attack ads against him is already suggested on the Michigan Democratic web site.

After referring to Rinke as a “Toyota salesman,” the page says:

“The out-of-touch millionaire was sued multiple times by employees who alleged he asked women if they were wearing matching underwear, made lewd sexual gestures, employed `relentless racial slurs’ and even made sexually suggestive comments about infants.”

With accusations like this on his resume, it’s a wonder Rinke didn’t get an immediate endorsement from Trump, whose sexism and racism delight some of his reactionary supporters. But Trump has been cool to Rinke, who refuses to back the Big Lie that President Biden and the Democrats stole the election of 2020.

In Trump’s spring visit to Macomb County, his rally speech mentioned only Dixon among GOP candidates for governor, but he didn’t endorse her. Craig and Johnson lurked like the living dead about the fringes of the MAGA mob. But Trump never invited them backstage. Rinke wasn’t there.

In a midterm election expected to favor Republicans nationally, Michigan is one swing state that could stay blue.

Finally, a defense of zombies. Their modern incarnation began with George Romero’s black-and-white film “Night of the Living Dead” in 1968, the year Richard Nixon resurrected his political life.

Romero said the bad guys weren’t the flesh-eating zombies but really the living humans who were unable to cooperate to save themselves.

In today’s terms, think of the “zombies” as Covid-19, widespread gun slaughter and fossil fuels that poison the Earth. And where do Republicans like Rinke stand on these issues?

“My stories are about humans and how they react, or fail to react, or react stupidly,” Romero said. “I’m pointing the finger at us, not the zombies.”